Welcome to my website!  I'd like to take this opportunity to tell you a bit more about me.

I am a professional horticulturist and life-long native plant enthusiast.  My love of horticulture and gardening in general started at an early age as I was fortunate enough to have acres of woods in which to play and explore, and eventually garden, in Garnet Valley, Pennsylvania.  I learned quickly about the native plants that grew in those woods, such as wild ginger, (Asarum canadensis), toothwort (​Cardamine concatenata​), and, one of my favorites for early spring, bloodroot, (Sanguinaria canadensis).

I was fortunate, too, to have many inspiring individuals who guided me and taught me the intricacies of horticulture that one can only learn effectively by being out in the garden.  One person that influenced me greatly as a teen was Josephine Breneman, another wildflower enthusiast.  Her garden was a short walking distance from my home and I visited her often, helping to weed and transplant. She shared many excellent plants with me that I placed in my own wildflower garden at my parents'.   I learned so much about so many unique and exciting native plants, shrubs and trees many of which were brought to her by the late botanist Edgar Wherry.  Thank you Mrs. Breneman!

Early on, my parents had a vegetable plot as well as various small gardens that surrounded their home.  I had plenty of "play space" to try all sorts of plants, both the ones I was given by others and the ones I purchased. From exotic Dahlias and, of course, hybrid tea roses to peonies and tall-bearded irises, I tried growing everything.  The one genus in particular I was taken with early on was Iris.  So much did I enjoy these that my mother gave me a budget and allowed me to order as many plants as I could afford.  That started me off at age 13 and within a few years I had almost a hundred cultivars, had joined the local iris society and the American Iris Society and was trying my hand at hybridizing!  By the time I was ready to attend college my education path was set... HORTICULTURE!

I studied ornamental horticulture, as it was known then, at the University of Delaware and went on to eventually start my own business.  In the meantime, I worked for other landscaping companies and garden centers, and it gave me some very good exposure to the retail aspect of Horticulture.  It was during this time I learned about the increased need for specialized horticultural maintenance.  So I started my own business and continued that until I saw a position opening at Mt. Cuba Center.  I worked there for over eight years where I held the positions of Horticulturist, Woods Path Horticulturist and Director of Horticulture.  I was so pleased to care for the Woods Path and put my skills of native plants and naturalistic gardening to excellent use.  It

was a beautiful place to work! During this time I expanded my lecturing and did so

in the UK.  I also had the chance to botanize on behalf of Mt. Cuba and experience

much professional development.  All in all, it was an incredible learning experience.

In October of 2013, I resigned at Mt. Cuba Center and accepted the Director of

Horticulture position at the newly-forming Delaware Botanic Gardens. Thus far, it is

a volunteer position until the new garden can procure funding, however we are making

great progress.  Every donation helps!  So, in the interim, I continue to provide

horticultural services, from garden maintenance and consulting to lecturing on a wide

variety of topics.  Check out my Lectures page! 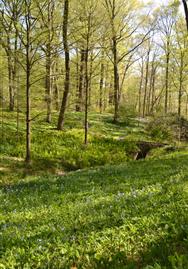